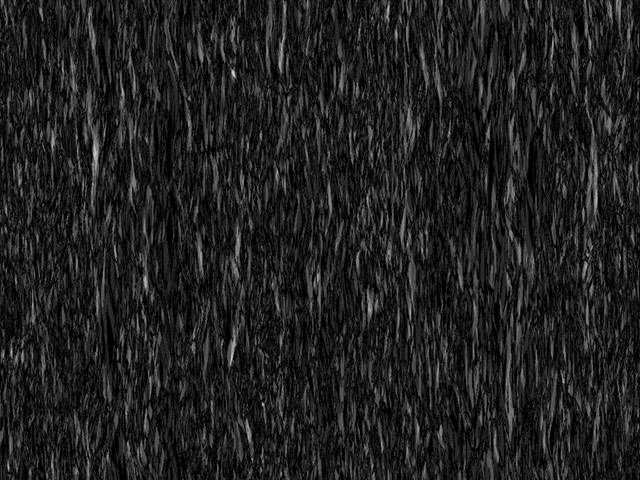 WONOKROMO is a research about visual noise divided into two sections. The concept of noise is related to the concept of signal. A signal serves to transmit information, on the contrary noise is a disturbing element that prevents the transmission of information. There are various types of noises: the most known is sound, but in truth for each type of signal there is also a type of noise. So the visual noise is connected to the visual signal.

I created the first section by animating synthetic hairs, changing different parameters such as their thickness, curliness, stiffness, gravity, and others. I chose the best sequences and combined them all, resulting in more sequences. Then I chose again the best ones, and put them together over time.

The second part was more complex to create. Fig. 1 shows a table of the possible noises I could chose in the sofware I was using: those actually chosen are marked in red.

Fig. 1 Table of the possible noises

I first mapped the noises on a flat synthetic surface, and thus created several sequences in which different parameters were changed each time. This way I got 66 different sequences.

I then combined them all and chose the best ones, resulting in a first level of 116 new sequences. This process was particularly long, as for each sequence all the others were tried. Each combination was also done using different transfer modes: darken, multiply, linear burn, color burn, add, lighten, screen, linear dodge, color dodge, overlay, soft light, hard light, vivid light, pin light, difference, exclusion.

Afterwards, I chose the most interesting 60 results, and combined them together, always with different transfer modes. This process gave me a second level of 230 new sequences.

At that point it was difficult for me to navigate among the sequences I last created. Therefore, I decided to classify them and to create a database containing different parameters related each sequence. That helped me to choose the most suitable sequences in order to create the final animation. The parameters in the database were category, quality, duration, speed, density, global luminosity and maximum luminosity.

The last two parameters, global and maximum luminosity, were obtained by analysing the first frame of each sequence. Other parameters resulted from image analysis, such as average intensity, average contrast, third moment, smoothness, uniformity and entropy. Although interesting, these last six parameters were not actually taken into account. The ones that were indeed used were category, quality, density and global luminosity.

Once the complete animation was done, I further analysed its global luminosity, and decided to cut some parts to improve the overall fluidity.

Fig. 2 Global luminosity of the second section, before final cuts

Fig. 3 Global luminosity of the second section, after final cuts